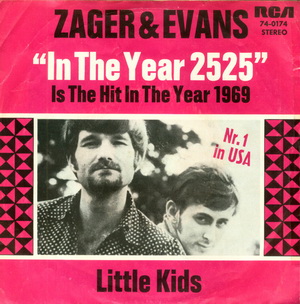 The song “In the Year 2525”  by Rick Evans begins with the phrase “In the year 2525, If man is still alive, If woman can survive…” and goes on to describe a dystopian future in 1,010 year increments — 3535, 4545, 5555, etc. The song begins in A minor, and modulates up by half-steps through several minor keys. The minor key and pseudo-gypsy harmony foretell mankind’s bleak future. For example in the year 3535 all of our feelings, thoughts and words will be determined by a daily pill. According to Zager and Evans, we are doomed by our own passive dependence on technology.

“In the Year 2525” was #1 on the Billboard Hot 100 for six weeks and #1 in the UK for three weeks in 1969. Zager and Evans were unable to follow their monster hit with another chart single. However the song has a legacy of its own. It has been covered at least 60 times in seven different languages. Notable versions include covers by Italo-French singer Dalida and the UK group Visage. It has been used as a theme song for TV series Cleopatra 2525, Millennium, and the animated series Futurama.

Ain’t gonna need to tell the truth, tell no lie
Everything you think, do and say
Is in the pill you took today

In the year 4545
You ain’t gonna need your teeth, won’t need your eyes
You won’t find a thing to chew
Nobody’s gonna look at you

In the year 6565
Ain’t gonna need no husband, won’t need no wife
You’ll pick your son, pick your daughter too
From the bottom of a long glass tube

In the year 7510
If God’s a-coming, He oughta make it by then
Maybe He’ll look around Himself and say
“Guess it’s time for the Judgment Day”

In the year 8510
God is gonna shake His mighty head
He’ll either say, “I’m pleased where man has been”
Or tear it down, and start again

Now it’s been ten thousand years, man has cried a billion tears
For what, he never knew, now man’s reign is through
But through eternal night, the twinkling of starlight
So very far away, maybe it’s only yesterday”

The Daily Doo Wop Rec Room has daily featured doo wop music, rock and roll hits, R&B, or rockabilly songs that werewere hits during the first era of rock and roll (that is, from about 1952 until the British invasion in 1964). After a song is featured, it then goes into the juke box. You are welcome to listen to any of the 40+ selections there. Every weekend, there is a Golden Oldies Juke Box Saturday Night, and the juke box is full of song requests from the 1950s and 1960s.

Please click here for the Daily Doo Wop YouTube channel, to which you can subscribe. Thank you for stopping by The Daily Doo Wop. Hope you enjoyed “In the Year 2525” by Zager and Evans.