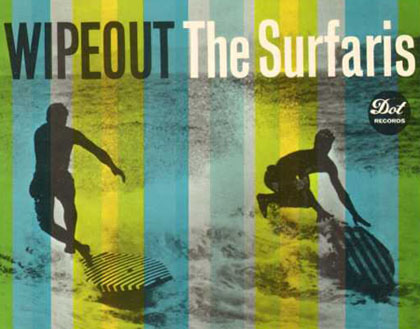 Almost everyone knew someone who would play the drum part to “Wipe Out” with pencils on their school desk — if you didn’t do it yourself. This classic surf rock composition starts with the cracking of a surfboard and a crazy voice saying: “ha ha ha ha ha wipe out.” The song is one of the best instrumentals of the time and has been featured in many movie soundtracks, including Surf’s Up, Herbie Fully Loaded, Little Big League, The Sandlot, Dirty Dancing, and The Wanderers. “Wipe Out” went to #2 on the Billboard Hot 100 in 1963 and was a hit internationally. “Wipe Out” was again on the charts in 1966, where it went to #16 on the U.S. Billboard Hot 100 and #9 on Cash Box.

The Surfaris were a California group that formed in 1962. (They are not to be confused with another surf rock group called The Safaris, who had a hit with “Image of a Girl” in 1960.) The original members were Ron Wilson, Jim Fuller, Bob Berryhill, and Pat Connolly. Those four wrote “Wipe Out.” It was the B-Side to their song “Surfer Joe.” Dale Smallin, their band manager, is the voice heard at the beginning of “Wipe Out.”

For more instrumental surf rock: “Pipeline” by The Chantays, which is on Pass the Paisley’s sister site The Daily Doo Wop.

The Pass the Paisley Groove Pad is a resting stop, a place to chill out and listen to the featured song on the stereo. If the mood strikes you, click on the juke box to access and listen to the 50+ free online songs there. The TV has several channels, with selections updated twice a week. Every now and then, Pass the Paisley hosts an all-request of 1960s and 1970s songs for a Be-In at the juke box in the Groove Pad. Keep on truckin’. Hope you enjoyed “Wipe Out” by The Surfaris.