Lazy Day by Spanky and Our Gang 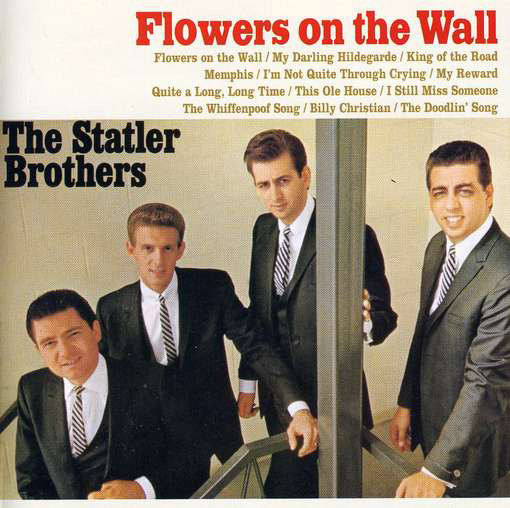 The song “Flowers on the Wall” was written by The Statler Brothers’ original tenor, Lew DeWitt. It tells the story of a man abandoned by the love of his life, who finds he has nothing to do. The song reached #2 on the Billboard Hot Country Singles chart and #4 on the Billboard Hot 100. Later it won the 1966 Grammy Award for Best Contemporary Performance-Group (Vocal or Instrumental.)

Possibly due to its quirky lyrics the song has an ongoing place in popular culture. For example, in the 1994 film Pulp Fiction, Bruce Willis sings along to the line “smoking cigarettes and watching Captain Kangaroo.” This line was also quoted in the 1995 film Die Hard with a Vengeance.

Fans of late night radio will recognize the song as the theme to the offbeat Coast To Coast AM hosted by Art Bell. Kurt Vonnegut, Jr. quoted the complete lyrics in his 1981 book Palm Sunday and commented, “It is not a poem of escape or rebirth. It is a poem about the end of a man’s usefulness.”

The Muppets created a YouTube viral video which has a group of rats, The Ratler Brothers, sing the song as poor Beaker suffers from insomnia. Of course, the reference to smoking cigarettes was removed, as well as any reference to their competitor, Captain Kangaroo. And Nancy Sinatra covered “Flowers on the Wall” in her 1966 album Boots.

The Statler Brothers were a country, gospel, and vocal group that formed in 1955. They were originally called The Kingsmen, but after another group with that name had a hit with “Louie, Louie,” they changed theirs. Although two of the members of the group were brothers, none had the name Statler. That was on a brand of facial tissue they saw at a hotel. (And they said that their name just as easily could have been Kleenex.) They also did backup vocals for Johnny Cash. They were Don Reid (lead vocals), Harold Reid (Don’s older brother, bass vocals), Phil Balsley (baritone), and Lew DeWitt (tenor, guitar). Jimmy Fortune replaced Dewitt in 1983. The group had hits on the Country charts with “Do You Know You Are My Sunshine, ” “Elizabeth,” “My Only Love,” and “Too Much on My Heart.”

And here are the lyrics to “Flowers on the Wall” by The Statler Brothers:

I keep hearin’ you’re concerned about my happiness
But all that thought you’re givin’ me is conscience I guess
If I was walkin’ in your shoes, I wouldn’t worry none
While you ‘n’ your friends are worried about me I’m havin’ lots of fun

Last night I dressed in tails, pretended I was on the town
As long as I can dream it’s hard to slow this swinger down
So please don’t give a thought to me, I’m really doin’ fine
You can always find me here, I’m havin’ quite a time

The Pass the Paisley Groove Pad is a resting stop, a place to chill out and listen to the featured song on the stereo. If the mood strikes you, click on the juke box to access and listen to the 50+ free online songs there. The TV has several channels, with selections updated twice a week. Every now and then, Pass the Paisley hosts an all-request of 1960s and 1970s songs for a Be-In at the juke box in the Groove Pad. Keep on truckin’. Hope you enjoyed “Flowers on the Wall” by The Statler Brothers.