Wild Thing by The Troggs 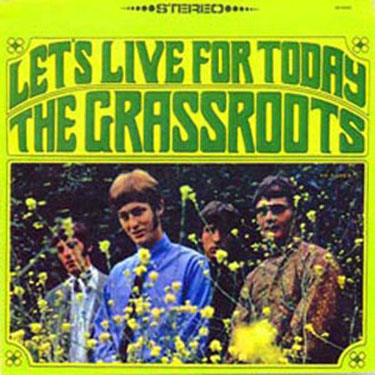 The song “Let’s Live For Today” has an unusual history. It was written by David Shapiro and Ivan Mogul in 1966 for the Italian market. It had Italian lyrics and the Italian title of “Piangi Con Me” (“Cry with Me”). At the time he wrote it, David Shapiro was a member of British band The Rokes who had relocated to Italy. They released “Piangi Con Me” on RCA Italiana and it became their biggest Italian hit to date. The record found its way to ABC Dunhill President Jay Lasker, who was one of the U.S.A.’s huge record moguls at the time. Lasker thought it would be a good song for his band The Grass Roots.

In 1967 ABC Dunhill records was home to some great talent, the most noteworthy being superstar producing team P.F. Sloan and Steve Barri who produced The Grass Roots. Sloan and Barri fell in love with the song, which they admitted was dangerously close in melody to The Drifters “I Count The Tears.”

“Let’s Live for Today” was recorded by The Grass Roots, with the help of a number of studio musicians, including Sloan on lead guitar, and was released as a single in May 1967. The lead vocal on The Grass Roots’ recording was sung by the band’s bassist Rob Grill, while the iconic “1-2-3-4” count-off to the hook was intoned by guitarist Warren Entner.

The record went to #8 on the Billboard Hot 100, sold more than two million copies and was awarded an RIAA Gold Record. “Let’s Live for Today” was particularly popular with young American men serving in Vietnam. The song struck a chord with men who were serving in combat, with the lyrics reminiscent of letters home, phrases from last dates, and loving thoughts directed at deeply missed wives or girlfriends.

Here are the lyrics to “Let’s Live for Today” by The Grass Roots:

By chasing after money
And dreams that can’t come true
I’m glad that we are different
We’ve better things to do
May others plan their future
I’m busy loving you.

We were never meant to worry
The way that people do
And I don’t mean to hurry
As long as I’m with you.

We’ll take it nice and easy
And use my simple plan
You’ll be my lovin’ woman
I’ll be your lovin’ man.
We’ll take the most from living
Have pleasure while we can.

For another song by The Grass Roots: “Midnight Confessions.”

The Pass the Paisley Groove Pad is a resting stop, a place to chill out and listen to the featured song on the stereo. If the mood strikes you, click on the juke box to access and listen to the 50+ free online songs there. The TV has several channels, with selections updated twice a week. Every now and then, Pass the Paisley hosts an all-request of 1960s and 1970s songs for a Be-In at the juke box in the Groove Pad. Keep on truckin’. Hope you enjoyed “Let’s Live for Today” by The Grass Roots.