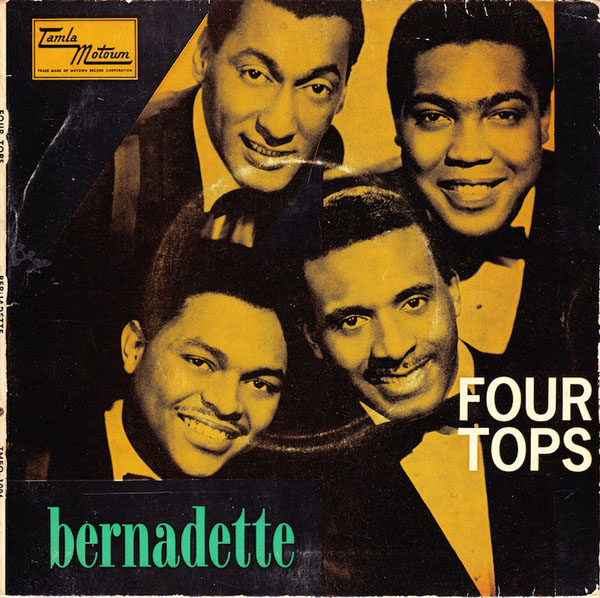 This dramatic song about desire and jealousy was written by the great Motown team of Brian Holland-Lamont Dozier-Eddie Holland. They and groups such as The Four Tops helped to define that Motown sound. In 1967, the song went to #4 on the U.S. Billboard Hot 100, #2 on the U.S. R&B Chart, and #8 in the U.K.

The Four Tops formed in Detroit in 1953. Members for the song were Levi Stubbs (lead vocals) with Abdul “Duke” Fakir, Renaldo “Obie” Benson, and Lawrence Payton (backing vocals). Instrumentation was provided by the Motown session musicians The Funk Brothers. Additional backing vocals were provided by The Andantes (Jackie Hicks, Marlene Barrow, and Louvain Demps). The Four Tops maintained their lineup for many decades, but there have been membership changes over the years. They continue to tour and perform.

Here are the lyrics to “Bernadette” by The Four Tops:

“Bernadette, people are searchin’ for the kind of love that we possess
Some go on searchin’ their whole life through
And never find the love I’ve found in you
And when I speak of you I see envy in other men’s eyes
And I’m well aware of what’s on their minds
They pretend to be my friend

In your arms I find the kind of peace of mind the world is searching for
But you, you give me the joy this heart of mine has always been longing for
In you I have what other men long for
All men need someone to worship and adore
That’s why I treasure you and place you high above
For the only joy in life is to be loved
So whatever you do Bernadette, keep on loving me, Bernadette, keep on needing me Bernadette

You’re the soul of me
On that dream, you’re a queen to me
And Bernadette, you mean more to me
Than a woman was ever meant to be”

For another song by The Four Tops: “(Reach Out) I’ll be There.”

The Pass the Paisley Groove Pad is a resting stop, a place to chill out and listen to the featured song on the stereo. If the mood strikes you, click on the juke box to access and listen to the 50+ free online songs there. The TV has several channels, with selections updated twice a week. Every now and then, Pass the Paisley hosts an all-request of 1960s and 1970s songs for a Be-In at the juke box in the Groove Pad. Keep on truckin’. Hope you enjoyed “Bernadette” by The Four Tops.