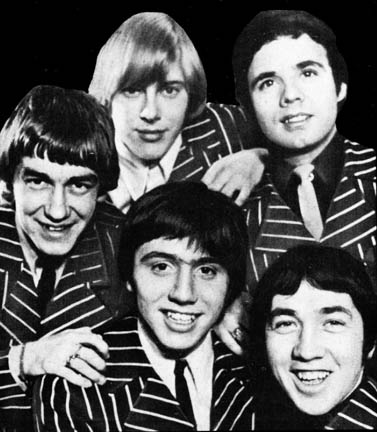 The song “Friday on My Mind” was written and recorded in 1966, but it anticipated the sounds of early 1980s Punk Rock style. Written by band members George Young (later producer of his brothers Malcolm and Angus Young in the band AC/DC) and Harry Vanda, it became an international smash hit in 1967 reaching #1 in The Netherlands and Australia, #6 in the U.K. and #16 in the U.S.

“Friday On My Mind” has minor key verses representing drudgery and boredom of the work week. Each day is named in succession and each line builds toward Friday with an ascending melody. The rising vocal culminates with a triumphant shouted “Friday on my mind!” This opens up into a major key refrain celebrating all the youthful fun of a weekend in the city.

George Young responded to the description of the song being Australia’s “working class anthem” by saying “It has more to do with our outlook on the world than any class statement.” Guitarist Harry Vanda credits the record’s unique guitar opening to the band hearing a film score featuring The Swingle Singers. “It went tudutudutudu, which made us all laugh,” he said. “On the train back from a gig, we were imitating them and suddenly it sounded good.”

In May 2001, the Australasian Performing Right Association (APRA) celebrated its 75th anniversary by naming the Best Australian Songs of all time, decided by a panel of 100 record executives and producers. “Friday On My Mind” was selected as the #1 Best Australian Song of All Time. The song was later covered by Peter Frampton, Bruce Springsteen, and David Bowie.

Here are the lyrics to “Friday on My Mind” by The Easybeats:

Gonna have fun in the city
Be with my girl, she’s so pretty
She looks fine tonight
She is out of sight to me
Tonight I’ll spend my bread, tonight
I’ll lose my head, tonight
I’ve got to get to night

Gonna have fun in the city
Be with my girl, she’s so pretty
She looks fine tonight.
She is out of sight to me
Tonight I’ll spend my bread, tonight
I’ll lose my head, tonight

The Pass the Paisley Groove Pad is a resting stop, a place to chill out and listen to the featured song on the stereo. If the mood strikes you, click on the juke box to access and listen to the 50+ commercial free online songs there. The TV has several channels, with selections updated twice a week. Every now and then, Pass the Paisley hosts an all-request of 1960s and 1970s songs for a Be-In at the juke box in the Groove Pad. Keep on truckin’. Hope you enjoyed “Friday on My Mind” by The Easybeats.