The Dock of the Bay by Otis Redding

Gerry and The Pacemakers Ferry Cross the Mersey

King of the Road by Roger Miller

The Dock of the Bay by Otis Redding 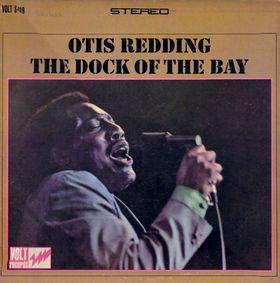 At the time Redding was writing the song, he had just finished his performance at the Monterey Pop Festival. He had been in San Francisco playing at the Fillmore when he stayed at a boathouse in Sausalito and liked the idea of the ships coming in at the bay. Redding had recorded the whistling at the end of the song because he forgot the words to a rap he was going to put there. Steve Cropper did a final mix of the song after Redding’s death. He added the sounds of waves and seagulls, which Cropper said Redding had wanted. Sam “Bluzman” Taylor re-did the whistling at the end.

Redding was born Otis Ray Redding, Jr. in Dawson, Georgia. Whether he was called The Big O or The King of Soul, he was mutli-talented. He was a singer, songwriters, record producer, arranger, and talent scout. Besides “(Sittin’ On) The Dock of the Bay,” he is known for “Respect” and “Try a Little Tenderness.”

Here are the lyrics to “(Sittin’ On) The Dock of the Bay” by Otis Redding:

“Sitting in the morning sun
I’ll be sitting when the evening come
Watching the ships roll in
And I’ll watch ’em roll away again, yeah

Sitting here resting my bones
And this loneliness won’t leave me alone, yes
Two thousand miles I roam
Just to make this dock my home

The Pass the Paisley Groove Pad is a resting stop, a place to chill out and listen to the featured song on the stereo. If the mood strikes you, click on the juke box to access and listen to the 40+ songs there. The TV has several channels, with selections updated twice a week. Every now and then, Pass the Paisley hosts an all-request of 1960s and 1970s songs for a Be-In at the juke box in the Groove Pad. Keep on truckin’. Hope you enjoyed “(Sittin’ On) The Dock of the Bay” by Otis Redding.