Daydream by The Lovin’ Spoonful 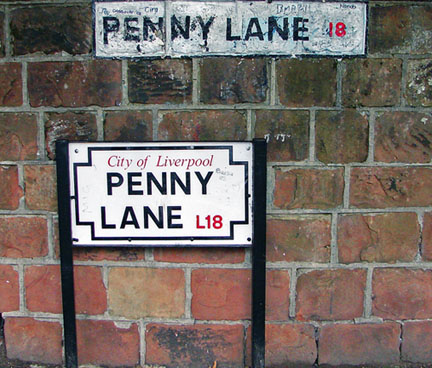 The song “Penny Lane” by The Beatles is a wonderful example of Sixties British Invasion music. This nostalgic song is credited to Paul McCartney and John Lennon.  Penny Lane is the name of a street in Liverpool, England, with a bus terminus, and many buses had “Penny Lane” displayed on them. McCartney said, “I’d get a bus to his [Lennon’s] house and I’d have to change at Penny lane, or the same with him to me, so we often hung out at that terminus.” The record was released in February, 1967, as one side of a double A-sided single with “Strawberry Field Forever.” Later in 1967, “Penny Lane” was included on their U.S. version of their  Magical Mystery Tour album (but not on the U.K. EP).

Here are the lyrics to “Penny Lane” by The Beatles:

Penny Lane, the barber shaves another customer
We see the banker sitting waiting for a trim
And the fireman rushes in from the pouring rain
Very strange

If you are interested in listening to and reading about another song by The Beatles, please click here for “And I Love Her.”

The Pass the Paisley Groove Pad is a resting stop, a place to chill out and listen to the featured song on the stereo. If the mood strikes you, click on the juke box to access and listen to the 50+ commercial free online songs there. The TV has several channels, with selections updated twice a week. Every now and then, Pass the Paisley hosts an all-request of 1960s and 1970s songs for a Be-In at the juke box in the Groove Pad. Keep on truckin’. Hope you enjoyed “Penny Lane” by The Beatles.