The Beatles A Hard Day’s Night

The Beatles A Hard Day’s Night 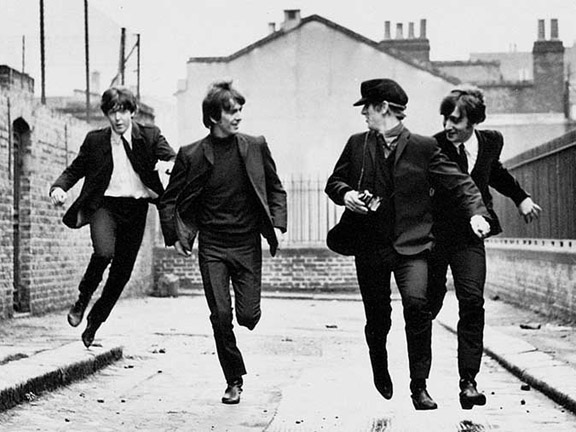 The song “A Hard Day’s Night” by The Beatles opens — as does the 1964 film with same name — with that magnificent “mighty opening chord” from George Harrison on his Rickenbacker 360/12 12-string guitar. The song was written by John Lennon and credited to Lennon-McCartney, and it is a classic of the Sixties British invasion. Evidently, the idea came from a Ringo-ism. Ringo said, “We went to do a job, and we’d work all day and we happened to work all night. I came up still thinking it was day…and I said: ‘It’s been a hardy day…’ and I looked around sand saw it was dark so I said,’…night!” The song was featured in the film and on the 1964 album The Beatles, which is also called A Hard Day’s Night. In 1964, the song went to #1 in the U.S. (Billboard Hot 100 and Cash Box), Canada, the U.K., Australia, The Netherlands, and Norway. It rose to #2 in Germany and #4 in Belgium.

The covers are legion and have been done in a variety of genres. They include versions by The Chipmunks, The Supremes, Quincy Jones, Ramsey Lewis, Santo & Johnny, The Typhoons, The Kingsmen, Peggy Lee, Ella Fitzgerald, Chet Atkins, Earl Grant, Johnny Rivers, the Bar-Kays, Dionne Warwick, John Mayall, Otis Redding, and Billy Joel, just to get started on a list.

Here are the lyrics to “A Hard Day’s Night” by The Beatles:

You know I work all day to get you money to buy you things
And it’s worth it just to hear you say you’re going to give me everything
So why on earth should I moan, ’cause when I get you alone
You know I feel OK When I’m home everything seems to be right

So why on earth should I moan, ’cause when I get you alone
You know I feel OK

If you are interested in reading about and listening to another song from the album and film “A Hard Day’s Night,” please click here for “And I Love Her.”

The Pass the Paisley Groove Pad is a resting stop, a place to chill out and listen to the featured song on the stereo. If the mood strikes you, click on the juke box to access and listen to the 50+ free online songs there. The TV has several channels, with selections updated twice a week. Every now and then, Pass the Paisley hosts an all-request of 1960s and 1970s songs for a Be-In at the juke box in the Groove Pad. Keep on truckin’. Hope you enjoyed “A Hard Day’s Night” by The Beatles.