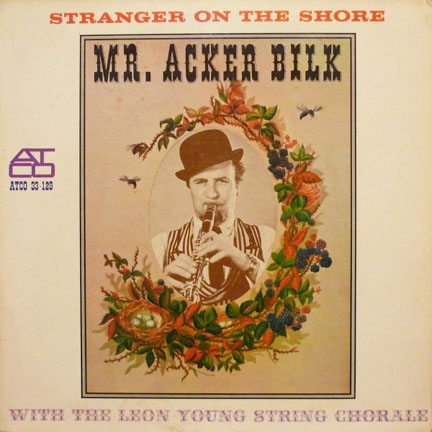 The selection for this week’s Instrumentals Tuesday is “Stranger on the Shore” by Mr. Acker Bilk. It has been one of the biggest-selling instrumentals on the pop charts.  The piece was written and played on the clarinet by Acker Bilk (who added the “Mr.” to his name when recording). Bilk wrote the song for his young daughter and named the song “Jenny” after her. Later, it was used as the theme song for a BBC TV drama  called “Stranger on the Shore.” The TV theme became so popular it was released as a single in England in 1961 and went to #2 on the U.K. charts. In early 1962, “Stranger on the Shore” was released in the US, where it went to #1 on the Billboard Hot 100 in May.

In a year when most hit songs were up-tempo, with plenty of rock and doo-wop, “Stranger on the Shore” provided a romantic and beautiful break from “the big beat.” In the era of the Berlin Wall, the Cuban Missile Crisis, and The Cold War, Americans were apparently craving the type of soothing, introspective melody that boosted this song to #1, with sales of 1.16 million records.

In May 1969, the crew of Apollo 10 took “Stranger on the Shore” on their mission to the moon. Gene Cernan, a member of the crew, included the tune on a cassette tape used in the command module of the Apollo spacecraft.

“Stranger on the Shore” is featured in Phillip Kaufman’s 1979 film The Wanderers, when the main character Richie Gennaro (Ken Wahl) meets and falls in love with the exotic and beautiful Nina Becker (Karen Allen).

“Stranger on the Shore” is also briefly quoted in the instrumental section of Enya’s 1988 song, “On Your Shore” from her Watermark album.

The Pass the Paisley Groove Pad is a resting stop, a place to chill out and listen to the featured song on the stereo. If the mood strikes you, click on the juke box to access and listen to the 50+ free online songs there. The TV has several channels, with selections updated twice a week. Every now and then, Pass the Paisley hosts an all-request of 1960s and 1970s songs for a Be-In at the juke box in the Groove Pad. Keep on truckin’. Hope you enjoyed “Stranger on the Shore” by Mr. Acker Bilk.