Steppenwolf Born to be Wild

Tommy James and the Shondells I Think We’re Alone Now

Steppenwolf Born to be Wild 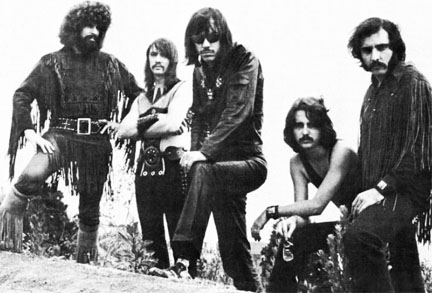 This proto-metal, hard rock song has come to be an anthem of sorts for the freedom and joy of riding on the road. It was particularly associated with motorcycles. The song was first used in the 1969 film Easy Rider and became a counterculture classic.

The song was written by Mars Bonfire, which is the stage of Canadian musician and songwriter Dennis Edmonton (born Dennis Eugene McCrohan). Bonfire is the brother of Jerry Edmonton (born Gerald McCrohan), who was the drummer for Steppenwolf. Bonfire and his brother had been members of Jack London & The Sparrows, later called The Sparrows, who had formed in 1964 in Oshawa, Ontario, Canada. Other Steppenwolf personnel had been part of the gang as well, including John Kay, Goldy McJohn, Michael Monarch, and Rushton Moreve.

Bonfire says that inspiration for the song came when he was walking down Hollywood Boulevard in Los Angeles and say a poster in a window that had a picture of a motorcycle erupting out of the earth like a volcano and said “Born to Ride.” The song was released on their 1968 album Steppenwolf and then as a single with “Everybody’s Next One” on the B-Side. “Born to be Wild” went to #1 on the Canadian Charts and #2 on the U.S. Billboard Hot 100. Rolling Stone magazine has it on their list of the “500 Greatest Songs of All Time.” John Kay, of Rolling Stone, says that “Every generation thinks they’re born to be wild and they can identify with that song as their anthem.”

“Born to be Wild” is considered to be among the early heavy metal songs. The lyrics contain the phrase “heavy metal thunder.” Heavy metal as a term is credited to William Burroughs, who used it his 1961 novel The Soft Machine. To Burroughs, heavy metal was “the ultimate expression of addiction, that there’s something actually metallic in addiction.” Hmm. Well, whether it denotes freedom or addiction, the term remained.

Here are the lyrics to “Born to be Wild” by Steppenwolf:

Yeah, darlin’
Gonna make it happen
Take the world in a love embrace
Fire all of your guns at once
And explode into space

Yeah, darlin’ Gonna make it happen
Take the world in a love embrace
Fire all of your guns at once
And explode into space

Yeah, darlin’
Gonna make it happen
Take the world in a love embrace
Fire all of your guns at once
And explode into space

The Pass the Paisley Groove Pad is a resting stop, a place to chill out and listen to the featured song on the stereo. If the mood strikes you, click on the juke box to access and listen to the 50+ free online songs there. The TV has several channels, with selections updated twice a week. Every now and then, Pass the Paisley hosts an all-request of 1960s and 1970s songs for a Be-In at the juke box in the Groove Pad. Keep on truckin’. Hope you enjoyed “Born to be Wild” by Steppenwolf.