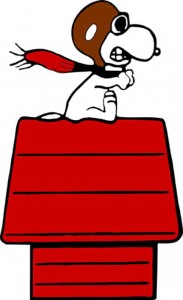 Charles Schultz based Snoopy after one of his childhood dogs, named Spike, and the character appeared in the comic strip on October 4, 1950. Snoopy was silent at first but by 1952 had thought balloons. As the comic strip progressed through the years, Snoopy took on more human qualities and seemed to forget he was a dog. By 1958, Snoopy walked on his two hind legs. Eventually, by 1965, we got to see a whole fantasy world with Snoopy as a World War I flying ace.

The Royal Guardsmen were a rock band from Ocala, Florida. They took their name as The Royal Guardsmen in keeping with the British Invasion of American music scene that was happening at the time. The group consisted of Bill Balough (bass), John Burdett (drums), Chris Nunley (vocals), Tom Richards (guitar), Billy Taylor (organ), and Barry Winslow (vocals-guitar). While their first single “Baby Let’s Wait” was not a commercial success, their second single “Snoopy vs. The Red Baron” was. It is a novelty pop rock song that describes a fictional encounter between First World War ace pilot Manfred von Richthofen and Snoopy. It was released in 1966, and, by 1967, it had gone to #2 on the U.S. Billboard Hot 100, #6 in the U.K., and #1 in Australia. It sold more than one million copies and earned an RIAA gold record. 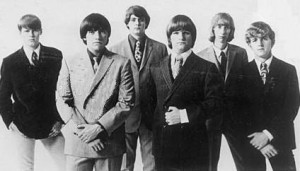 The Royal Guardsmen had not asked for permission or an advertising license for Schultz’s beloved Snoopy. Scultz and United Features Syndicate (UFS) sued The Royal Guardsmen and won. So publishing revenues went to Schulz and UFS. However, they did allow the Guardsmen to write more Snoopy-featured songs. That gave us “The Return of the Red Baron” and “Snoopy’s Christmas.” (And we hesitate to mention this but will anyway, there were “Snoopy for President” and “Snoopy vs Osama.”

Here are the lyrics to “Snoopy Vs. The Red Baron” by The Royal Guardsmen:

“After the turn of the century
In the clear blue skies over Germany
Came a roar and a thunder men had never heard
Like the screamin’ sound of a big war bird
Up in the sky, a man in a plane
Baron von Richthofen was his name
Eighty men tried, and eighty men died
Now they’re buried together on the countryside

In the nick of time, a hero arose
A funny-looking dog with a big black nose
He flew into the sky to seek revenge
But the Baron shot him down – “Curses, foiled again!”

Now, Snoopy had sworn that he’d get that man
So he asked the Great Pumpkin for a new battle plan
He challenged the German to a real dogfight
While the Baron was laughing, he got him in his sight

The Pass the Paisley Groove Pad is a resting stop, a place to chill out and listen to the featured song on the stereo. If the mood strikes you, click on the juke box to access and listen to the 50+ free online songs there. The TV has several channels, with selections updated twice a week. Every now and then, Pass the Paisley hosts an all-request of 1960s and 1970s songs for a Be-In at the juke box in the Groove Pad. Keep on truckin’. Hope you enjoyed “Snoopy vs. The Red Baron” by The Royal Guardsmen.