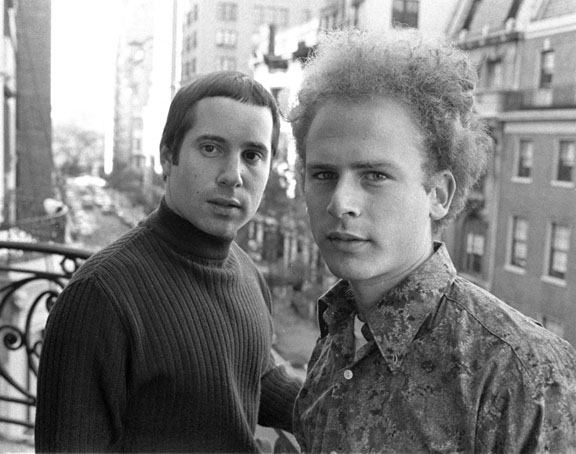 The song “The Sounds of Silence” was written by Paul Simon. It was released in 1964 on their debut album Wednesday Morning, 3 A.M. The album did not do well, and the duo split up. In 1965, the song picked up some airplay and the producer, Tom Wilson, remixed the track with electric instrumentation by musicians who had played on Bob Dylan’s “Like a Rolling Stone.” The single with the remix was released in 1965 and rose all the way to #1 on the Billboard Hot 100 by December of that year. “The Sounds of Silence” was also an international top ten hit on the charts in the U.K., Ireland, Australia, Austria, West Germany, The Netherlands, and Japan. The duo came back together again, and song was also included in Simon and Garfunkel’s 1966 album Sounds of Silence.

(The title of the song has had some iterations as well. It was originally “The Sounds of Silence” and then retitled “The Sound of Silence” on compilation albums.) In 2013, the song was added to the National Recording Registry in the Library of Congress for being “culturally, historically, or aesthetically important.”

Simon and Garfunkel were one of the most popular folk groups in the 1960s. They parted in 1970, and both went on to solo careers, which they continue to this day. There have been many reunions since then.

Here are the lyrics to “The Sounds of Silence” by Simon and Garfunkel:

“Hello darkness, my old friend,
I’ve come to talk with you again,
Because a vision softly creeping,
Left its seeds while I was sleeping,
And the vision that was planted in my brain
Still remains
Within the sound of silence.

In restless dreams I walked alone
Narrow streets of cobblestone,
‘Neath the halo of a street lamp,
I turned my collar to the cold and damp
When my eyes were stabbed by the flash of a neon light
That split the night
And touched the sound of silence.

And in the naked light I saw
Ten thousand people, maybe more.
People talking without speaking,
People hearing without listening,
People writing songs that voices never shared
And no one dared
Disturb the sound of silence.

“Fools,” said I, “You do not know –
Silence like a cancer grows.
Hear my words that I might teach you.
Take my arms that I might reach you.”
But my words like silent raindrops fell
And echoed in the wells of silence
And the people bowed and prayed
To the neon god they made.
And the sign flashed out its warning
In the words that it was forming.
And the sign said, The words of the prophets are written on the subway walls
And tenement halls
And whispered in the sounds of silence.”

For more songs by Simon and Garfunkel: “The Boxer,” “Bridge Over Troubled Water,” and “The 59th Street Bridge Song (Feelin’ Groovy).”

The Pass the Paisley Groove Pad is a resting stop, a place to chill out and listen to the featured song on the stereo. If the mood strikes you, click on the juke box to access and listen to the 40+ songs there. The TV has 4 channels, with selections updated twice a week. Every now and then, Pass the Paisley hosts an all-request of 1960s and 1970s songs for a Be-In at the juke box in the Groove Pad. Keep on truckin’. Hope you enjoyed “The Sounds of Silence” by Simon and Garfunkel.