Simon and Garfunkel The Boxer

Light My Fire by The Doors

Simon and Garfunkel The Boxer 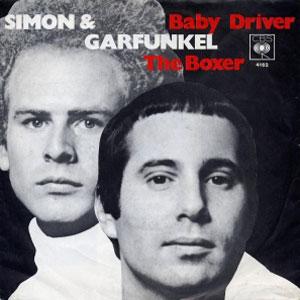 The song “The Boxer” was written by Paul Simon and performed and produced by Paul Simon and Art Garfunkel with engineer and record producer Roy Halee. They released the song as a single in 1969, backed with “Baby Driver,” and it was an international success. It went to #7 on the U.S. Billboard Hot 100, #6 in the U.K., #2 in The Netherlands and Austria, #3 in Canada and South Africa, #7 in Ireland, #8 in Australia, #5 in Sweden, and #9 in Norway. The song was also released on Simon & Garfunkel’s 1970 fifth and final studio album Bridge Over Troubled Water.

The poetic lyrics by Simon are somewhat autobiographical. At the time, Simon and Garfunkel, who had been praised for years, were receiving criticism. In an 1984 Playboy interview, Simon said, “I think the song was about me: Everybody’s beating me up, and I’m telling you now I’m going to go away if you don’t stop…It took two or three years for people to realize that we weren’t strange creatures that emerged from England but just two guys from Queens who used to sing rock’n’roll. And maybe we weren’t real folkies at all! Maybe we weren’t even hippies!” Simon and Garfunkel’s fighter still remained, though, and kept on through the years through many artistic explorations.

The phrases “workman’s wages” and “seeking out the poorer quarters,” Simon says, come from the Bible, which he would read sometimes when in hotels. Ah, the life on the road…

The use of “Lie-la-lie” for the chorus was a placeholder lyric because Simon couldn’t find the right words. It is not unusual in songwriting, and there have been other successful songs, including “(Sittin’ On) The Dock of the Bay” by Otis Redding , which uses whistling, and “Ain’t No Sunshine” by Bill Withers, which is known for its repetition of “I know.” Simon was not satisfied with that and still finds it a bit embarrassing. However, it was simple and was easy for others to repeat — and it made it accessible in overcoming language barriers for an international market.

The recording of the song had its moments. It took a lengthy 100 hours to record. They produced it in several places, including a studios in Nashville, Columbia studios, and St. Paul’s Chapel in New York City. The latter location had terrific acoustics. They recorded Hal Blaine’s big drum sound next to an elevator in the Columbia offices. They also had Roy Halee’s boss, the legendary Clive Davis, to buy them a 16-track recorder, as the 8-track they had wasn’t enough. There was an extra verse for the song, which Simon sometimes sings at concerts. There are also differences in the instrumentation between the single version and the album cut, but let’s not go into the weeds on this and enjoy the song.

Simon and Garfunkel were one of the most popular sixties folk rock groups. They parted in 1970, and both went on to solo careers, which they continue to this day. There have been many reunions since then.

Here are the lyrics to “The Boxer” by Simon and Garfunkel:

I am just a poor boy.
Though my story’s seldom told,
I have squandered my resistance
For a pocketful of mumbles,
Such are promises
All lies and jest
Still, a man hears what he wants to hear
And disregards the rest.

When I left my home
And my family,
I was no more than a boy
In the company of strangers
In the quiet of the railway station,
Running scared,
Laying low,
Seeking out the poorer quarters
Where the ragged people go,
Looking for the places
Only they would know.

Asking only workman’s wages
I come looking for a job,
But I get no offers,
Just a come-on from the whores
On Seventh Avenue
I do declare,
There were times when I was so
lonesome
I took some comfort there.

Then I’m laying out my winter clothes
And wishing I was gone,
Going home
Where the New York City winters
Aren’t bleeding me,
Leading me,
Going home.

In the clearing stands a boxer,
And a fighter by his trade
And he carries the reminders
Of ev’ry glove that laid him down
Or cut him till he cried out
In his anger and his shame,
“I am leaving, I am leaving.”
But the fighter still remains

If you are interested in reading about and listening to other songs by Simon and Garfunkel:  “The Sounds of Silence,” “Bridge Over Troubled Water,” and “The 59th Street Bridge Song (Feelin’ Groovy).”

For an album of music by Simon and Garfunkel, please click on the photo below:

The Pass the Paisley Groove Pad is a resting stop, a place to chill out and listen to the featured song on the stereo. If the mood strikes you, click on the juke box to access and listen to the 50+ free online songs there. The TV has several channels, with selections updated twice a week. Every now and then, Pass the Paisley hosts an all-request of 1960s and 1970s songs for a Be-In at the juke box in the Groove Pad. Keep on truckin’. Hope you enjoyed “The Boxer” by Simon and Garfunkel.