Go Now by The Moody Blues 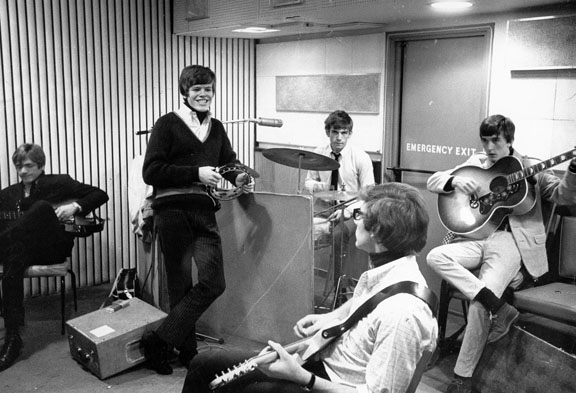 The song “Silhouettes” by Herman’s Hermits was part of the Sixties music British invasion. The son was written by Bob Crewe and Frank Slay and first recorded by the doo wop group The Rays in 1957. Singer, songwriter, producer, and manager Bob Crewe got the idea when he saw a couple embracing through a window shade as he passed on a train. Crewe and Frank Slay, Jr.,  turned it into a song and they recorded it on Slay’s XYZ label. Cameo-Parkway picked it up for national distribution.  In “Silhouettes,” the singer sees on through the window shade the shadows of a couple kissing and thinks his girlfriend’s cheating on him. He knocks on the door and discovers he has the wrong house on the wrong block. He rushes to the correct house and he vows that he and his girl will be silhouettes on the shade forever. For The Rays, “Silhouettes” reached #3 on the U.S. Pop Singles Chart and the R&B Chart. It sold more than one million copies and received an RIAA gold record.

In 1965, a cover of “Silhouettes” was an international success for Herman’s Hermits. It rose to #1 in Canada, #5 on the U.S. Billboard Hot 100, #3 in the U.K. and Australia, “#2 in New Zealand, and #17 in Sweden. They had heard the song on American Armed Forces Radio, which was part of the American Forces Network (AFN) The AFN provides entertainment and command information for American servicemen and women, Department of Defense and other U.S. government civilians and their families overseas, as well as the U.S. Navy ships at sea. The song has also been covered by The Diamonds, The Four Seasons, Cliff Richard, Frankie Lymon, The Crests, The Nylons,  The Ronettes, and Bob Dylan and the Band, just to mention a few.

Here are the lyrics for “Silhouettes” by Herman’s Hermits:

Took a walk and passed your house late last night
All the shades were pulled and drawn way down tight
From within, the dim light cast two silhouettes on the shade
Oh what a lovely couple they made

Put his arms around your waist, held you tight
Kisses I could almost taste in the night
Wondered why I’m not the guy whose silhouette’s on the shade
I couldn’t hide the tears in my eyes

Lost control and rang your bell, I was sore
Let me in or else I’ll beat down your door
When two strangers who have been two silhouettes on the shade
Said to my shock “you’re on the wrong block”

If you want to read and listen to another song by Herman’s Hermits, please click here for “Mrs. Brown, You’ve Got a Lovely Daughter.”

If you would like to read about and listen to the version of “Silhouettes” by The Rays, please click here. It is on Pass The Paisley’s sister website The Daily Doo Wop.

The Pass the Paisley Groove Pad is a resting stop, a place to chill out and listen to the featured song on the stereo. If the mood strikes you, click on the juke box to access and listen to the 50+ commercial free online songs there. The TV has several channels, with selections updated twice a week. Every now and then, Pass the Paisley hosts an all-request of 1960s and 1970s songs for a Be-In at the juke box in the Groove Pad. Keep on truckin’. Hope you enjoyed “Silhouettes” by Herman’s Hermits.