In the beginning… The ABC network broadcast American Bandstand, which begat Hootenanny, which begat Shindig! And Hootenanny was good, as it brought folk music to prime time. Initially very popular, it aired only from April 1963 to September 1964. By 1964, rock and roll had become revitalized by the California sound and the British Invasion. The Shindig! mujsical variety show was quickly rushed into production to reflect those changes and premiered the same month Hootenanny ended.

The artists on Shindig! included Sonny & Cher, The Beach Boys (as seen in the photo below), James Brown, the Supremes, The Byrds, and other top performers of the day. The Shindig! shows taped in London included The Beatles, The Rolling Stones, and The Who. Another big attraction of Shindig! was its troupe of go-go dancers. One of the regular dancers was Teri Garr, whose later acting career included roles in the films Tootsie and Close Encounters of the Third Kind. The backup band and singers included Billy Preston, Bobby Sherman, and Darlene Love. 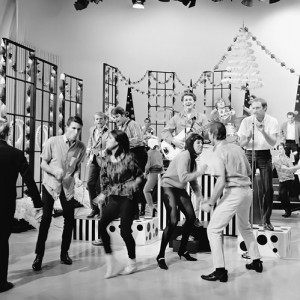 Shindig! was hosted by Jimmy O’Neill (as seen in the photo below), a popular L.A. radio DJ. Unlike American Bandstand, where most of the groups lip-synced to their hits, on Shindig!, almost all of the groups sang live. And there was no padding with variety acts — just a nonstop stream of singing and dancing. A TV set seemed like a feeble glass barrier against the energy pulsating from the performers and screaming audience. 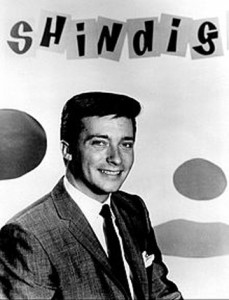 ABC decided to split the 60-minute show into two half-hours on two different nights: Thursday and Saturday. But instead of increasing the audience, it fractured it. And the success of Shindig! resulted in many other rival music/dance shows, such as Hullabaloo on NBC. Ratings didn’t recover.  Shindig! was cancelled in January 1966. Its Thursday timeslot was taken over by another soon-to-be cultural landmark: Batman. Fortunately, many of the Shindig! shows were saved, so those classic performances can still be seen. As O’Neill said at the end of each show: “No matter what anyone says, rock on!”

Here is a retrospective of the Shindig! musical variety show that was put together in 1991. (Running time is 22:31.) Among the guests featured are Donna Loren, The Turtles, Rick Derringer, Jackie Wilson, Fontella Bass, Jackie DeShannon, Jerry Lew Lewis, Paul Revere & The Raiders, Buffalo Springfield, Aretha Franklin, Lesley Gore, James Brown, Diana Ross & The Supremes, and so many more.

Here is a quick promo for the Shindig! musical variety show from 1964:

Check Out The Groove Pad for More 1960s Fare

The Pass the Paisley Groove Pad is a resting stop, a place to chill out and listen to the featured song on the stereo. If the mood strikes you, click on the juke box to access and listen to the 50+ commercial free online songs there. The TV has several channels, with selections of sixties tv shows updated occasionally. Every now and then, Pass the Paisley hosts an all-request of 1960s and 1970s songs for a Be-In at the juke box in the Groove Pad.