San Francisco Be Sure to Wear Flowers

The Blues Magoos We Ain’t Got Nothin’ Yet

Mel Carter Hold Me Thrill Me Kiss Me

San Francisco Be Sure to Wear Flowers 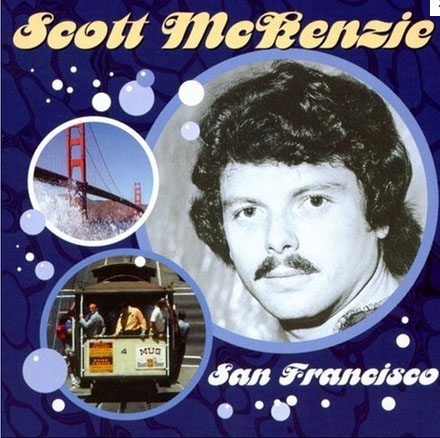 Ah yes, Scott McKenzie’s “San Francisco (Be Sure to Wear Flowers in Your Hair)” is a good example of Sixties psychedelic pop. It is also one of those songs that bring up the images of the counterculture of the Sixties, and it is one of those songs that brought thousands of people for the U.S. and around the world to San Francisco to experience the counterculture there. Producers John Phillips (of The Mama’s & The Papas) and Lou Adler used the song to help promote the 1967 Monterey International Pop Music Festival.

The song was written by John Phillips in 1967. Singer/songwriter Scott McKenzie recorded and released it as a single backed with “What’s the Difference” and on his 1967 album The Voice of Scott McKenzie. Phillips played guitar on the recording. There were also Gary L. Coleman on orchestra bells and chimes, Hal Blaine on drums, and Joe Osborn on bass. The song rose quickly to #4 on the U.S. Billboard Hot 100 and #1 on the U.K. Singles Chart. It was very popular throughout Europe.

In Central Europe, during Czechoslovakia’s 1968 Prague Spring uprising, people adopted “San Francisco” as a anthem for freedom. (Needless to say, the Soviets were not amused, as they controlled the area at the time.)

In response to this song, The Bee Gees wrote “Massachusetts,” which they released a bit later in 1967, where the narrator of the song has gone to San Francisco along with many others and now is homesick for Massachusetts. (The Bee Gees had never been to Massachusetts at that time.) It went to #1 in Australia and the U.K. , going on to become one of the best-selling singles of all time. Go figure.

Here are the lyrics to “San Francisco (Be Sure to Wear Flowers in Your Hair) by Scott McKenzie:

The Pass the Paisley Groove Pad is a resting stop, a place to chill out and listen to the featured song on the stereo. If the mood strikes you, click on the juke box to access and listen to the 50+ free online songs there. The TV has several channels, with selections updated twice a week. Every now and then, Pass the Paisley hosts an all-request of 1960s and 1970s songs for a Be-In at the juke box in the Groove Pad. Keep on truckin’. Hope you enjoyed “San Francisco (Be Sure to Wear Flowers in Your Hair” by Scott McKenzie.