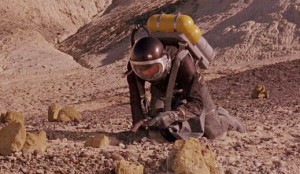 An American astronaut is stranded on Mars, forced to use his wits to survive the bleak Martian environment.  He needs to find oxygen, water, and food. Isn’t there a movie with this storyline? There sure is! The just-released film The Martian. But a film with a similar story was first released in 1964 not 2015. Robinson Crusoe on Mars was written by Ib Melchior and John Higgins (based, of course, on Daniel Defoe’s novel Robinson Crusoe), directed by Byron Haskin (known for the 1953 classic film The War of the Worlds), and produced by Paramount. It starred Paul Mantee, Victor Lundin, and soon-to-be Batman Adam West. Although the movie did have some of the standard science fiction elements of the day, such as evil aliens, Robinson Crusoe on Mars was an early attempt at creating a “real” space adventure, something that Star Trek would soon emulate.

It was a critical hit, but the movie didn’t do well with early ’60s audiences—maybe because it didn’t have bug-eyed monsters and sweater-popping women. However, its imaginative story and gorgeously shot scenes (with California’s Death Valley filling in for Mars) slowly built an appreciative audience through video and DVD releases. Robinson Crusoe on Mars currently has a 93% rating on movie website Rotten Tomatoes. The film’s big-budget 2015 cousin, The Martian, has a 94% rating. Not bad for a low-budget movie that’s over 50 years old. What’s even more remarkable is that with the recent news about water embedded in the Martian soil, what was pure fantasy in 1964 could actually be true in the near future. As the movie’s poster proclaimed: “This film is scientifically authentic… Only one step ahead of present reality!”

Here is a free movie download to the complete film Robinson Crusoe on Mars. Running time: 1:31:26.