Raindrops Keep Fallin’ On My Head

The Who I Can’t Explain

Raindrops Keep Fallin’ On My Head 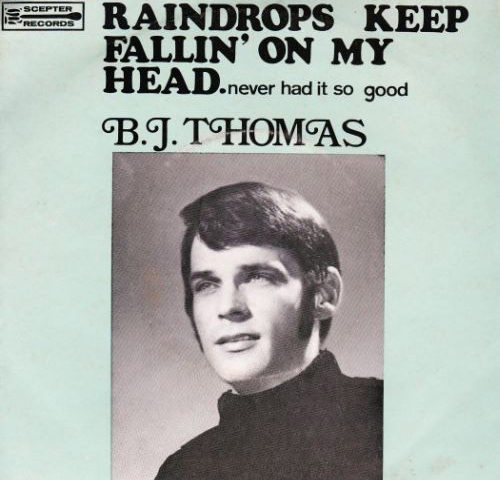 In 1969, B.J. Thomas’s “Raindrops Keep Fallin’ on My Head, which was written for the film Butch Cassidy and the Sundance Kid, was an internationally charting success. It was at #1 on the U.S. Billboard Hot 100, the Adult Contemporary Chart, and on Cash Box. It was also #1 in Canada, Norway, and South Africa. It was within the Top 40 in Australia, Austria, The Netherlands, Germany, Ireland, New Zealand, Italy, and the U.K. Besides earning an RIAA gold record, the accolades include an Academy Award for Best Original Song. “Raindrops Keep Fallin’ On My Head” is on the America Film Institute’s list “100 Years…100 Songs”, and it was inducted into the Grammy Hall of Fame in 2014. 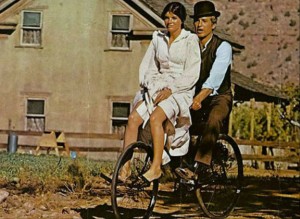 The song was written by Hal David (credited as Mack David) and Burt Bacharach (later as Luther Dixon). What can we say? It’s a fluid business. The film version has a vaudeville-style instrumental break during which Paul Newman does stunts — minus Katharine Ross– on a bicycle (evidently, his stunt man kept falling off the bike). The trumpet solos are by Chuck Findlay. Backup singer Linda November received a gold record for her work on the song as well.

B.J. Thomas was born Billy Joe Thomas in Hugo, Oklahoma, in 1942. His singing career has included songs in a number of genres, including country, pop, contemporary Christian music, and rock. Thomas has hits, just to mention a few, with “I’m So Lonesome I Could Cry,” “Hooked on a Feeling,” “I Just Can’t Help Believing,” “Most of All,” “Rock and Roll Lullaby,” and “(Hey Won’t You Play) Another Somebody Done Somebody Wrong Song,”

Here are the lyrics to “Raindrops Keep Fallin’ On My Head” by B.J. Thomas:

“Raindrops are falling on my head
And just like the guy whose feet
Are too big for his bed
Nothing seems to fit
Those raindrops
Are fallin’ on my head
They keep fallin’.

But there’s one thing I know
The blues they send to meet me
Won’t defeat me, it won’t be long
Till happiness
Steps up to greet me

Raindrops keep fallin’ on my head
But that doesn’t mean my eyes
Will soon be turning red
Crying’s not for me ’cause,
I’m never gonna stop the rain
By complaining,
Because I’m free
Nothing’s worrying me

Raindrops keep fallin’ on my head
But that doesn’t mean my eyes
Will soon be turning red
Crying’s not for me cause,
I’m never gonna stop the rain
By complaining,
Because I’m free, ’cause nothing’s worrying me”

The Pass the Paisley Groove Pad is a resting stop, a place to chill out and listen to the featured song on the stereo. If the mood strikes you, click on the juke box to access and listen to the 50+ free online free online music there. The TV has several channels, with selections updated twice a week. Every now and then, Pass the Paisley hosts an all-request of 1960s and 1970s songs for a Be-In at the juke box in the Groove Pad. Keep on truckin’. Hope you enjoyed “Raindrops Keep Fallin’ On My Head” by B. J. Thomas.