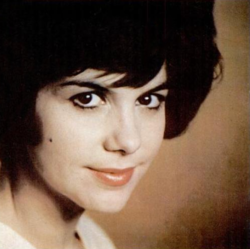 You’ve heard the song “King of Road” by Roger Miller, of course, well, here is “Queen of the House” by Jody Miller. An “answer song” is a song responding or somehow related to a previous song by another artist. An example is Dodie Stevens singing “Yes, I’m Lonesome Tonight” to Elvis’ impassioned question “Are You Lonesome Tonight?” Answer songs aren’t usually hits of the same magnitude that the original songs were, but one that came closer than most is “Queen of the House,” sung by Jody Miller. Released in 1965, the song is based on Roger Miller’s monster #1 hit from early 1965, “King of the Road.” Oddly, Jody Miller and Roger Miller aren’t related; their only connection to each other is through these songs. “Queen of the House” uses the same melody as “King of the Road” (and Roger is credited). But while Roger was singing of a free-and-easy vagabond life, Jody sings of the domestic bliss and blues that fill her days. The lyrics were written by Mary Taylor.

“Queen of the House” peaked at #12 on Billboard magazine’s Hot 100 and #5 on the country singles chart. Jody won a Grammy award for “Best Female Country Vocal Performance” for the song in 1966. It was some of that odd pop music in the Sixties.

Jody Miller was born Myrna Joy Miller in 1941 in Phoenix, Arizona. She began her career in the early 1960s in Oklahoma as a folk singer. She moved to L.A .and was discovered by Western TV star Dale Robertson (e.g., Tales of Wells Fargo, Iron Horse, Death Valley Days). She secured a contract with Capital and had some success. “Queen of the House” was her biggest hit, although she charted several other records in the Sixties and Seventies.

Jody’s country-flavored pop style helped establish that crossover sound, which singers such as Linda Ronstadt and Anne Murray also popularized. Jody semi-retired in the 1980s but re-emerged as a Christian music artist. She was inducted into the International Country Gospel Music Association Hall of Fame in 1998. She lives in Oklahoma, performs occasionally, and probably is still queen of her abode.

Here are the lyrics to “Queen of the House” by Jody Miller (and the video is a hoot):

“Up every day at six
Bacon and eggs to fix
Four kids from one to four
Pretty soon there’ll be one more.

I got old floors to wax and scrub
And there’s a dirty old ring in the tub
I’ll get a maid someday
But till then I’m queen of the house.

No time to fix my hair
Need a new dress to wear
Old clothes will have to do
’Cause kids all need new shoes.

I got bridge club each Tuesday night
He goes out with the boys and gets tight
But when the evening’s through he comes a home
To the queen of the house.

I know the milkman, the iceman they come every day
They give me tips on the horses to play
And when I got the time to spare
I sit and wish that I’d picked a rich millionaire.

I sing up every day at six
Bacon and eggs to fix
Four kids from one to four
Pretty soon there’ll be one more.

Oh, by Sundays I’m mighty glad
We send the kids to his mom and dad
It’s the day that makes me glad
I’m queen of the house.

Up every day at six
Bacon and eggs to fix
Four kids from one to four
Pretty soon there’ll be one more. 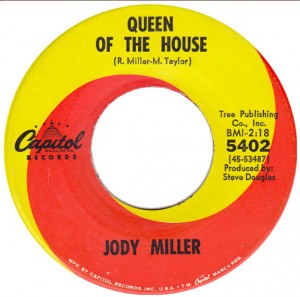 The Pass the Paisley Groove Pad is a resting stop, a place to chill out and listen to the featured song on the stereo. If the mood strikes you, click on the juke box to access and listen to the 50+ commercial free online songs there. The TV has several channels, with selections updated twice a week. Every now and then, Pass the Paisley hosts an all-request of 1960s and 1970s songs for a Be-In at the juke box in the Groove Pad. Keep on truckin’. Hope you enjoyed “Queen of the House” by Jody Miller.