Pretty Ballerina by The Left Banke

The Temptations Ball of Confusion

Pretty Ballerina by The Left Banke 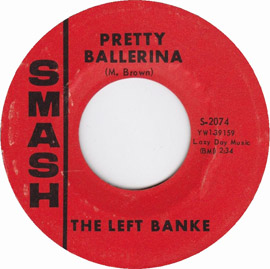 The song for this week’s Flip Side Friday is “Pretty Ballerina.” This song and “Walk Away Renée” are both about a ballerina named Renée Fladen. The group’s pianist Micahel Brown had a crush on her, but she was the girlfriend of their guitarist Tom Finn. (Another song about Renée was “She May Call You Up Tonight.”) In 1966, the song went to #15 on the U.S. Billboard Hot 100, #12 on the Cash Box Top 100 as well as  #4 in Canada and #13 in New Zealand. The song is known for its use of a string quartet and oboe.

The song has had numerous covers, including versions by Alice Cooper (whose wife is a ballet dancer), John Mellencamp. Jason Falkner, Peter Kingsbery, Eels, Allen Merrill, and more.

And what became of the eponymous Renee? Renee Fladen-Kamm is currently a noted singer, vocal teacher and recording artist living in the San Francisco Bay area. She records medieval music as vocal director of the San Francisco based Sherwood Consort.

Here are the lyrics to “Pretty Ballerina” by The Left Banke:

I had a date with a pretty ballerina
Her hair so brilliant that it hurt my eyes,
I asked her for this dance and then she obliged me
Was I surprised, yeah, was I surprised, no not at all

I called her yesterday, it should have been tomorrow
I could not keep this joy that was inside,
I beg for her to tell me if she really loved me,
Somewhere a mountain is moving
Afraid it’s moving without me.
(Instrumental Break)
La La La La La La

I had a date with a pretty ballerina
Her hair so brilliant that hurt my eyes
I asked for this dance and then she obliged me
Was I surprised, yeah, was I surprised, no not at all.

For another song by The Left Banke: “Walk Away Renee.”

The Pass the Paisley Groove Pad is a resting stop, a place to chill out and listen to the featured song on the stereo. If the mood strikes you, click on the juke box to access and listen to the 50+ free online songs there. The TV has several channels, with selections updated twice a week. Every now and then, Pass the Paisley hosts an all-request of 1960s and 1970s songs for a Be-In at the juke box in the Groove Pad. Keep on truckin’. Hope you enjoyed “Pretty Ballerina” by The Left Banke.