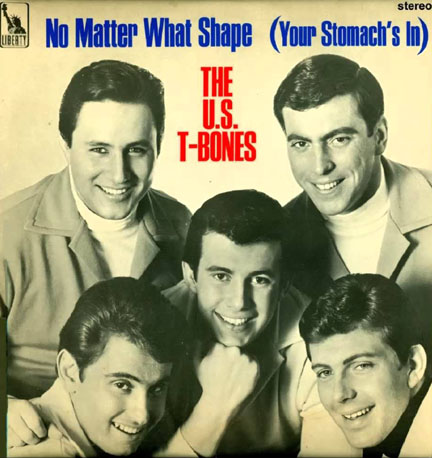 When art imitates TV: The instrumental “No Matter What Shape (Your Stomach’s In)” was inspired by an Alka-Seltzer TV commercial. In 1965, saxophonist and bandleader Dave Pell decided to record songs based on music from commercials. (Perhaps if Warhol could showcase Campbell’s soup cans, Pell could …well, you get the drift.) Pell’s idea was to get radio airplay and a hit record. So he put together a group of instrumentals using the fabulous  Los Angeles session musicians of The Wrecking Crew and recorded them as The T-Bones on Liberty Records.

The Wrecking Crew folks refused to go on the road as The T-Bones; they certainly had a nice, lucrative life as session musicians. (Among those on the track were Tommy Tedesco, Hal Blaine, Carol Kaye, Julius Wechter, Lyle Ritz, and more). So, the public T-Bones, who hadn’t played on the record, toured. Those T-Bones were Judd Hamilton, Dan Hamilton, Joe Frank Carollo, Tommy Reynolds, and Gene Pello.  They had other albums after that, including Sippin’ and Chippin’ (1966) and Everyone’s Gone to the Moon (And Other Trips) ( (1966). On the latter album, the touring T-Bones were the musicians on the recordings. Dan Hamilton, Carollo, and Reynolds later formed the soft rock group Hamilton, Joe Frank, and Reynolds in the 1970s.


And here are The T-Bones with “No Matter What Shape (Your Somtach’s In):

The Pass the Paisley Groove Pad is a resting stop, a place to chill out and listen to the featured song on the stereo. If the mood strikes you, click on the juke box to access and listen to the 50+ free online songs there. The TV has several channels, with selections updated twice a week. Every now and then, Pass the Paisley hosts an all-request of 1960s and 1970s songs for a Be-In at the juke box in the Groove Pad. Keep on truckin’. Hope you enjoyed “No Matter What Shape (Your Stomach’s In)” by The T-Bones.[/vc_column_text][/vc_column][/vc_row]