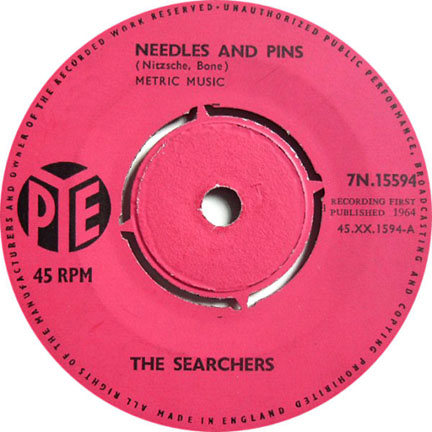 The song “Needles and Pins” was written by Jack Nitzsche and Sonny Bono (yes, the Sonny Bono of Sonny and Cher) . Jackie DeShannon first recorded it in 1963, and it was a minor hit in the U.S., going to #84 on the U.S. Billboard Hot 100, but it went to #1 in Canada. The Searchers, who were from Liverpool, England, wanted to record it when they heard Cliff Bennett form the song at a club in Hamburg, Germany. Indeed, they did. In 1964, it went to #1 in the U.K., Ireland, and South Africa. It went to #2 in Australia, #8 in Germany and Norway, and #13 on the U.S. Billboard Hot 100. The song was also on their 1964 It’s the Searchers album. Ah, now the song is part of sixties British music.

There have been many covers of the song, including versions by Cher, The Ramones, Crack the Sky, Willy DeVille, Tom Petty and the Heartbreakers, Gary Lewis & The Playboys, Smokie, The Turtles, Ultima Thule, and Petula Clark.

The Searchers got their name from the 1956 Western The Searchers, which was directed by John Ford and starred John Wayne. They formed in 1959 and were part of the 1960s Merseybeat scene, which also gave us The Beatles, The Hollies, The Fourmost, The Mersey Beats, Gerry and the Pacemakers, and The Swinging Blue Jeans. There have been lineup changes over the years, but for “Needles and Pins,” group members of The Searchers were John McNally, Mike Pender, Chris Curtis, and Tony Jackson. The group continues to tour and perform.

Here are the lyrics to “Needles and Pins” by The Searchers:

“I saw her today, I saw her face
It was a face I loved and I knew
I had to run away
And get down on my knees and pray
That they’d go away

Hey, I thought I was smart, I wanted her
Didn’t think I’d do, but now I see
She’s worse to him than me
Let her go ahead, take his love instead
And one day she will see

Just how to say please
And get down on her knees
Yeah, that’s how it begins
She’ll feel those needles and pins A hurtin her, a hurtin her

Because I saw her today, I saw her face
It was a face I loved and I knew
I had to run away
And get down on my knees and pray
That they’d go away

For another song by The Searchers: “Love Potion No. 9”

If you are interested in an album of music from The Searchers, please click on the link below:

The Pass the Paisley Groove Pad is a resting stop, a place to chill out and listen to the featured song on the stereo. If the mood strikes you, click on the juke box to access and listen to the 50+ commercial free online songs there. The TV has several channels, with selections updated twice a week. Every now and then, Pass the Paisley hosts an all-request of 1960s and 1970s songs for a Be-In at the juke box in the Groove Pad. Keep on truckin’.  Hope you enjoyed “Needles and Pins” by The Searchers.