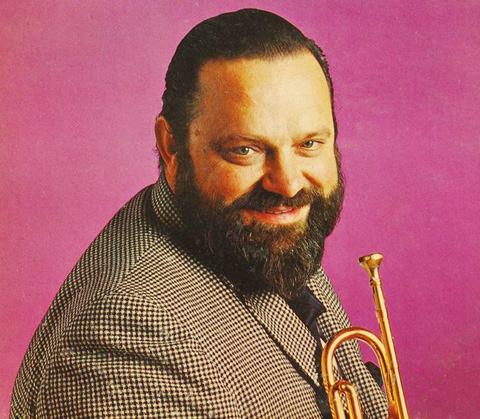 Trumpet player Al Hirt hit #4 in 1964 on the U.S. Billboard Hot 100 with the instrumental “Java.” It scored even higher on the Adult Contemporary chart: #1!

Sixties music is generally remembered for the British Invasion, surf and psychedelic music, and maybe the girl groups. But the music of that decade wasn’t segregated to just a few genres. And here’s exhibit A: A for Al. Al Hirt. Instead of a thin, good-looking, guitar-playing teen idol, here’s a round, middle-aged trumpet player — and not rocking out, but playing in a Dixieland style, no less. His clean, precise technique paired with this bright melody shot him into the top 10. File this record under SYJDHA: Stuff you just don’t hear anymore.

“Java” was written in the late ‘50s by rhythm and blues legend Allen Toussaint, whose original version was played on the piano. Something about it, though, said “trumpet” to Al, and he turned it into a Grammy-winning record. He had two other top 40 singles in 1964: “Cotton Candy” and “Sugar Lips.” And Al played the impressive solo on the theme song for the 1966 TV show The Green Hornet (it was also used in the 2003 Quentin Tarantino film Kill Bill). His albums sold well through the ‘80s, and he was a popular concert performer until the end of his life.

Al (Alois Maxwell) Hirt was born in New Orleans in 1922. He started playing the trumpet when he was six. He studied at the Cincinnati Conservatory of Music, played in Dixieland and swing bands, and was even a bugler in the U.S. Army. (Would’ve loved to hear his take on Reveille.”)  Al settled back in New Orleans in the 1950s, playing in a club on Bourbon Street. He later opened his own club. His nicknames included “The King” and “The Round Mound of Sound.” His last breath was in 1999. But the breath he magnificently used to push sound through his trumpet is preserved on these great tracks for “Java” and, for good measure, “The Green Hornet Theme.”

and, for good measure, “The Green Hornet Theme.”