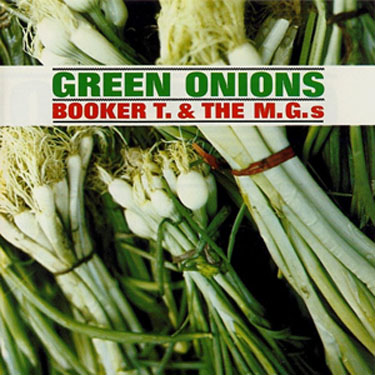 The selection for this week’s Instrumental Tuesdays is “Green Onions” by Booker T. and the M.G.s.

This funky and bluesy instrumental always sounds hot. Maybe that’s why it’s been used so many times in radio, TV, movies, and ads. This includes (among many others): American Graffiti, Dragon: The Bruce Lee Story, Get Shorty, Happy Gilmore, A Single Man, Quadrophenia, Memphis Beat, X-Men: First Class, the commercial for Chicken Run, and part of the music loop in Cars Land at Disney California Adventure park.  The instrumental was written by Booker T. Jones, Steve Cropper, Lewie Steinberg, and Al Jackson, Jr. In 1962, it reached #1 on the R&B Chart and #3 on the Billboard Hot 100.  It features a Hammond organ and a Fender Telecaster guitar.

Booker T. & the M.G.’s were session musicians for Stax Records in Memphis and recorded with numerous Stax artists, including Wilson Pickett, Otis Redding, and Isaac Hayes. The story goes that the  group named themselves after the British MG sports car, but the record company objected and the M.G. came to stand for “Memphis Group.”

For a composition by members of the group in an earlier formation: “Last Night” by The Mar-Keys.

The Pass the Paisley Groove Pad is a resting stop, a place to chill out and listen to the featured song on the stereo. If the mood strikes you, click on the juke box to access and listen to the 50+ free online songs there. The TV has several channels, with selections updated twice a week. Every now and then, Pass the Paisley hosts an all-request of 1960s and 1970s songs for a Be-In at the juke box in the Groove Pad. Keep on truckin’. Hope you enjoyed “Green Onions” by Booker T. and the M.G.s.