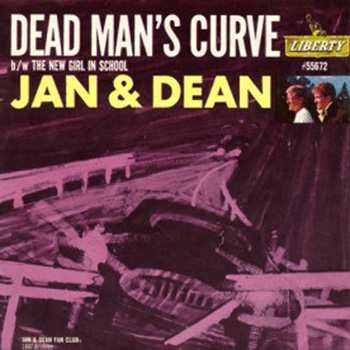 The song “Dead Man’s Curve” by Jan and Dean is a good example of sixties surf rock. Sun, sand, surf, cars, girls — and cars. Jan and Dean were Jan Berry (William Jan Berry) and Dean Torrence (Dean Ormsby Torrence) from Los Angeles, California. They were among the pioneers of the California-style vocal surf music along with others, for example, the Rip Chords and The Beach Boys. A dead man’s curve is a crescent-shape part of a road where numerous traffic accidents have occurred. And the song describes a real stretch of road in L.A. The song was written by Berry, Roger Christian (a DJ and car enthusiast), Brian Wilson (of The Beach Boys), and Artie Kornfeld (producer, music executive),. It went to #8 on the U.S. Billboard Hot 100 and #9 on Cashbox. Sometimes life imitates art, and eerily, Berry had a near-fatal car accident near dead man’s curve. He crashed his Stingray into a parked truck near a house once owned by Roman Polanski.

Here are the lyrics to “Dead Man’s Curve” by Jan and Dean:

I said, “You’re on, buddy, my mill’s runnin’ fine
Let’s come off the line, now, at Sunset and Vine”
But I’ll go you one better if you’ve got the nerve
Let’s race all the way to dead man’s curve

I flew past LaBrea, Schwab’s, and Crescent Heights
And all the Jag could see were my six taillights
He passed me at Doheny then I started to swerve

The Pass the Paisley Groove Pad is a resting stop, a place to chill out and listen to the featured song on the stereo. If the mood strikes you, click on the juke box to access and listen to the 50+ commercial free online songs there. The TV has several channels, with selections updated twice a week. Every now and then, Pass the Paisley hosts an all-request of 1960s and 1970s songs for a Be-In at the juke box in the Groove Pad. Keep on truckin’.  Hope you enjoyed “Dead Man’s Curve” by Jan and Dean.