Creedence Clearwater Revival Down on the Corner

Elvis Presley If I Can Dream

Creedence Clearwater Revival Down on the Corner 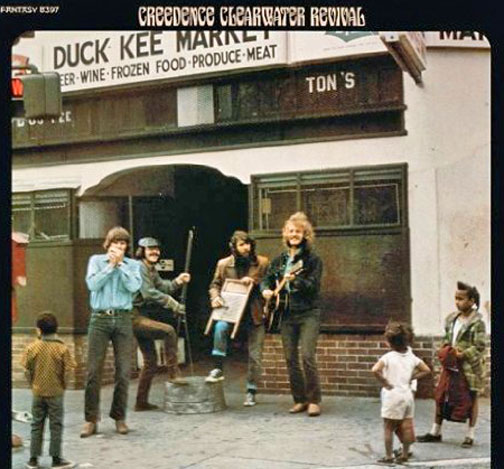 CCR member John Fogerty wrote this song about a band of musicians who play on their homemade instruments on street corners and bring happiness to the people. Don’t forget to give them a nickel! When the band appeared on The Ed Sullivan Show in 1969, they appeared as Willy and Poor Boys, with Stu Cook playing a gut bass. The group lineup at the time was John Fogerty (lead vocals, lead guitar, harmonica, keyboard, sax), Tom Fogerty (rhythm guitar, keyboard, piano, backing vocals), Stu Cook (bass, keyboards, backing vocals), and Doug Clifford (drums, percussions, backing vocals).

There have been numerous covers of the song, including versions by Jerry Reed, The Mavericks, Big Country, Beastie Boys, The Goo Goo Dolls, Street Corner Symphony, Miram Makeba, The Osmond Brothers, Harry Belafonte, and Bryan Adams.

Here are the lyrics to “Down on the Corner” by Creedence Clearwater Revival:

[Chorus:]
Down on the corner, out in the street
Willy and the Poorboys are playin’
Bring a nickel; tap your feet

Rooster hits the washboard and people just got to smile
Blinky, thumps the gut bass and solos for a while
Poorboy twangs the rhythm out on his kalamazoo
Willy goes into a dance and doubles on kazoo

You don’t need a penny just to hang around
But if you’ve got a nickel, won’t you lay your money down?
Over on the corner there’s a happy noise
People come from all around to watch the magic boys

For other songs by Creedence Clearwater Revival: “Bad Moon Rising” and “Susie Q.”

The Pass the Paisley Groove Pad is a resting stop, a place to chill out and listen to the featured song on the stereo. If the mood strikes you, click on the juke box to access and listen to the 50+ free online music there. The TV has several channels, with selections updated twice a week. Every now and then, Pass the Paisley hosts an all-request of 1960s and 1970s songs for a Be-In at the juke box in the Groove Pad. Keep on truckin’. Hope you enjoyed “Down on the Corner” by Creedence Clearwater Revival.