Chad and Jeremy A Summer Song

Chuck Berry You Never Can Tell

Chad and Jeremy A Summer Song 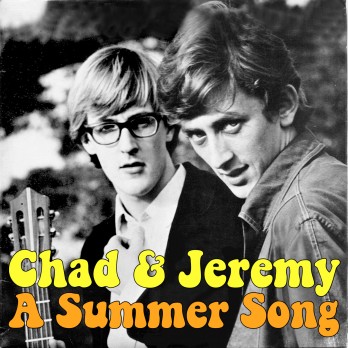 This soft and sad song that remembers a summer romance was written by Chad Stuart (the Chad of the duo), with Clive Metcalfe and Keith Noble. It was released as the title track on their first album , the 1964 Yesterday’s Gone. They also released it as a single, backed with “No Tears for Johnnie.” While the song was not a big hit in the U.K., as it was deemed a bit too sweet, it went to #2 on the U.S. Billboard Adult Contemporary Chart, #7 in Canada, and #49 in Australia. There have been a number of covers of the song, including versions by The Lettermen, Skeeter Davis, The Doodletown Pipers, and Laila Kinnunen, to mention a few.

Chad and Jeremy are Chad Stuart and Jeremy Clyde. John Barry, who composed the music for 12 James Bond films and other movies, including Dances With Wolves and Born Free, discovered the duo performing in a club in London. He also produced their first records, including “Yesterday’s Gone,” and helped develop their softer sound, which made them stand out from the harder rock sound of most of the other British groups.

Chad and Jeremy continue to tour and perform.

Here are the lyrics to “A Summer Song” by Chad and Jeremy:

If you are interested in reading about and listening to another song by Chad and Jeremy: “Yesterday’s Gone.”

The Pass the Paisley Groove Pad is a resting stop, a place to chill out and listen to the featured song on the stereo. If the mood strikes you, click on the juke box to access and listen to the 50+ free online songs there. The TV has several channels, with selections updated twice a week. Every now and then, Pass the Paisley hosts an all-request of 1960s and 1970s songs for a Be-In at the juke box in the Groove Pad. Keep on truckin’. Hope you enjoyed “A Summer Song” by Chad and Jeremy.