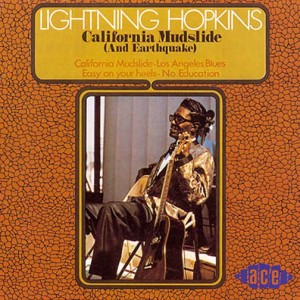 “Have mercy,” sings “Lightnin” Hopkins in “California Mudslide (and Earthquake). Mudslides in California have taken their human toll today, and it seems to be of Biblical importance, as California natural disasters often do. And after all of that flooding, the ground will be begin to shake. The song “California Mudslide (and Earthquake)” was written and performed by Lighnin’ Hopkins and recorded in 1969. It tells it all with a power that only the blues can have.

Lightnin’ Hopkins was born Sam John Hopkins in Centerville, Texas, in 1912. He was a country blues singer, songwriter, guitarist, and pianist. Rolling Stone magazine has Hopkins on their list of “100 Greatest Guitarists of All Time.” He has been a great influence on country blues and rock guitar players. He had a distinctive fingerstyle that allowed him to be, in effect, a one-man section (i.e., bass, rhythm, lead, percussion, vocals).

Hopkins grew up with the blues, influenced by musicians such as Blind Lemon Jefferson, Alger “Texas” Alexander, and Frankie Lee Sims. Hopkins recorded for Los Angeles-based record label Aladdin Records and Houston-based Gold Star Records. In the 1940s and 1950s, he mainly performed in Houston. With the folk music revival that occurred at the end of the 1950s and early 1960s, Hopkins’ music became known by a wider audience. He debuted at Carnegie Hall, New York, on October 14, 1960, with Joan Baez and Pete Seeger. Hopkins was part of the blues music in the Sixties scene. 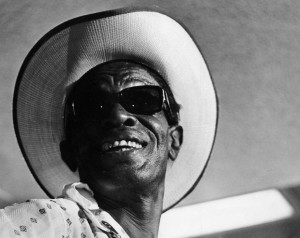 Throughout the 1960s and 1970s, Hopkins released one and sometimes two albums a year and played at folk festivals, folk clubs, and college campuses in the U.S., and internationally. He became Houston’s poet-in-residence for 35 years, and recorded more albums than any other bluesman. Hopkins died of cancer in 1982 at the age of 69.

Here are the lyrics for “California Mudslide (and Earthquake) by Lightnin’ Hopkins:

See, it’s rainin’ in ol’ California’s the reason I said it, the houses slidin’ down off the hill
Many, many many friends have lost their home, just because the water was falling so hard,
And the mudslide had taken their home And I said