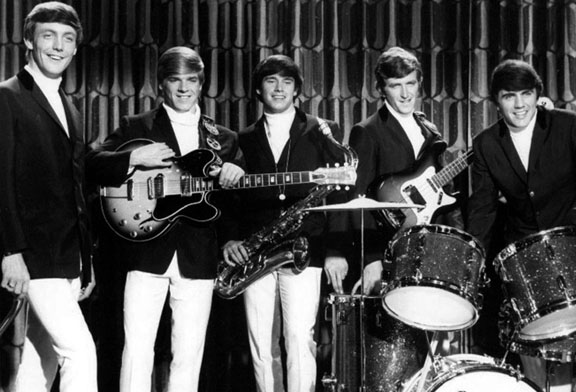 The selection for this week’s Flip Side Friday is “Because” by The Dave Clark Five. First it was a B-Side, and then it was an A-Side. Flip Flop. Their label Epic Records felt that The Dave Clark Five had strayed a bit from their so-far successful formula of upbeat singles. However, “Because” is a romantic ballad with nice harmonies all in their style, so they released it in 1964 first in the U.K. as the B-Side to “Can’t You See That She’s Mine.” Then they released “Because” as the A-Side in the U.S. because, well, evidently Dave Clark insisted. (“Can’t You See That She’s Mine” was then re-released with “No Time to Lose” as the B-Side. “Because” was re-released with “Them Without a Name” on the B-Side. Flip flop.)

There was no need for this tempest in a teapot. Both songs charted well, with “Because” slightly ahead. In 1964, “Because” went to #3 on the U.S. Billboard Hot 100 and Canada and #7 on the U.S. Cash Box Top 100. “Can’t You See that She’s Mine” went to #4 on the U.S. Billboard Hot 100 and #4 on Cash Box. Both songs sold more than one million copies and earned RIAA gold records. “Because” was also released as the first track on The Dave Clark Five’s 1964 album American Tour. There have been numerous covers of the song, with versions by The Supremes and Julian Lennon.

The Dave Clark Five consisted of Dave Clark (drums), Mike Smith (organ and lead vocals)), Lenny Davidson (guitar), Rick Huxley (bass), and Denis Payton (tenor and baritone saxophone). They had what was called (for promotional purposes) the Tottenham Sound, as they had formed in Tottenham, London, England. The term  was a response to the Mersey Beat sound of the Liverpool, Manchester, etc., bands. Anyway, they had a great big beat, and added texture with the saxophone. Their songs were generally light and entertaining.

The Dave Clark Five made 18 appearances on The Ed Sullivan Show and had 15 top 20 hits in three years. They were one of the most successful British Invasion bands after The Beatles. Clark said, “The American press pitted us against the Beatles, but there was no rivalry between us…the magazines made it up.”

Here are the lyrics to “Because” by The Dave Clark Five:

“It’s right that I should care about you
And try to make you happy when you’re blue
It’s right, it’s right to feel the way I do
Because, because I love you

Give me one kiss and I’ll be happy
Just, just to be with you
Give me, give me, a chance to be near you
Because, because I love you

If you are interested in reading about and listening to other song  by The Dave Clark Five: “Glad All Over” and “Over and Over.”

The Pass the Paisley Groove Pad is a resting stop, a place to chill out and listen to the featured song on the stereo. If the mood strikes you, click on the juke box to access and listen to the 50+ free online songs there. The TV has several channels, with selections updated twice a week. Every now and then, Pass the Paisley hosts an all-request of 1960s and 1970s songs for a Be-In at the juke box in the Groove Pad. Keep on truckin’. Hope you enjoyed “Because” by The Dave Clark Five.