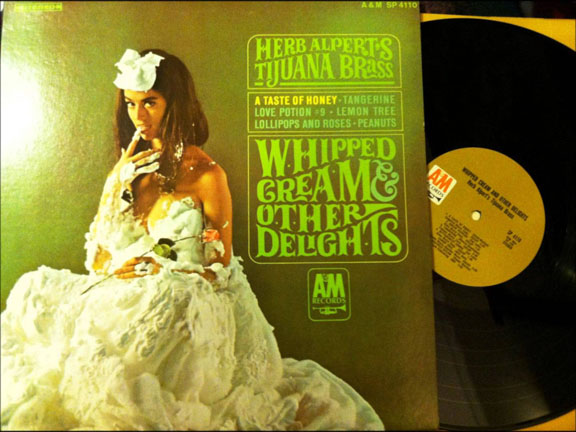 The selection for this week’s Instrumentals Tuesday is “A Taste of Honey” by Herb Alpert and The Tijuana Brass.  The composition “A Taste of Honey” was written by Bobby Scott and Ric Marlow initially as an instrumental track. It was the  recurring theme for the 1960 Broadway version of a 1958 British play titled A Taste of Honey. (The plot revolved around an English working class girl and her mother. It stirred up questions regarding class, race, gender, and sexual orientation.) The song was also used in the 1961 film of the same name. It first appeared on Bobby Scott’s 1960 album titled, you guessed it, A Taste of Honey. The tune went on to become a pop and jazz standard. Billy Dee Williams was the first to record a vocal version of the piece in 196.  It was covered by Barbra Streisand in 1962. In 1963, there were versions by The Beatles, Quincy Jones, Mr. Acker Bilk. The list continues with covers, instrumental and vocal, including ones by Eddie Cano, Martin Denny, Chet Atkins, Ethel Smith, Jackie Gleason, and The Temptations.

Herb Alpert was born in 1935 in Los Angeles. At the age of 80, he has many accomplishments to his name as a musician, arranger, composer, executive, paint, and sculptor. He and Lani Hall, who sang with Sergio Mendes, have been married since 1974. They have been very involved in philanthropic activities. In the 1980s they created The Herb Alpert Foundation and the Alpert Awards in the Arts with The California Institute of the Arts.

If you are interested in a song by Herb Alpert: “This Guy’s In Love with You.”

The Pass the Paisley Groove Pad is a resting stop, a place to chill out and listen to the featured song on the stereo. If the mood strikes you, click on the juke box to access and listen to the 50+ free online songs there. The TV has several channels, with selections updated twice a week. Every now and then, Pass the Paisley hosts an all-request of 1960s and 1970s songs for a Be-In at the juke box in the Groove Pad. Keep on truckin’. Hope you enjoyed “A Taste of Honey” by Herb Alpert and The Tijuana Brass.