The Beatles All My Loving 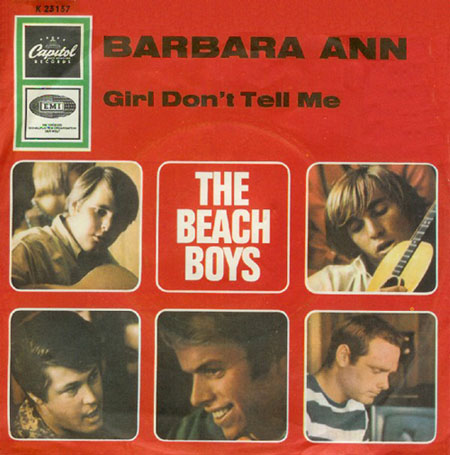 Fred Fassert wrote this song around 1958 and named it after his sister. His brother, Chuck Fassert, was a member of the doo wop group The Regents, and Fred gave it to them. They did not have luck peddling their songs and disbanded. However, in 1961, opportunity came knocking, and their version of the song went to #7 on the R&B Chart and #13 on the Billboard Hot 100 in 1961.  The Beach Boys, however, had the most famous version in 1965. They released it as a part of their 1965 album Beach Boys’ Party! and then as a single at the end of the year with “Girls Don’t Tell Me” as the B-side. Their cover (with a few changes) peaked at #2 on the U.S. Billboard Hot 100, #1 on Cash Box, and #3 in the U.K. It also was also at the top of the charts in Norway, Germany, and Switzerland.) There were also covers by Jan & Dean and The Who.

Part of the back story (Thanks, Rick Balian) is that Brian Wilson gave Jan & Dean “Surf City,” which went to # 1 in 1963 (Brian’s father was not at all pleased when he found out Brian had given this away — and then sang on it.) Fast forward to two years later, and Brian and the group were in the studio doing their Party! album. Jan and Dean were recording down the hall. Dean dropped in and suggested that they do “Barbara Ann” (Jan &Dean had covered it in 1962). That’s why on the track you can hear Carl Wilson say, “Thanks, Dean.” Dean later considered it a favor paid back for “Surf City.” The song :”Barbara Ann” was never intended to be a single. Capital released it because they were getting antsy that there wasn’t any new Beach Boys music, as Brian was busy working on the complex Pet Sounds album.

Keith Moon was a big Beach Boys/Jan & Dean fan. He had colored his hair blond and was in a surf rock band just before he joined The Who. He’s one of the reasons The Who covered “Barbara Ann” and “Bucket T” (a Jan & Dean song).

Here are the lyrics to “Barbara Ann” by The Beach Boys:

Here is the original “Barbara Ann” by The Regents, which is on Pass the Paisley’s sister site The Daily Doo Wop.

For more songs by The Beach Boys: “Sloop John B,” “Wouldn’t It Be Nice,” “Help Me Rhonda,” and “Good Vibrations.”

If you would like to read about The Beach Boys from Mike Love’s perspective, please click on the photo below:

The Pass the Paisley Groove Pad is a resting stop, a place to chill out and listen to the featured song on the stereo. If the mood strikes you, click on the juke box to access and listen to the 50+ free online songs there. The TV has several channels, with selections updated twice a week. Every now and then, Pass the Paisley hosts an all-request of 1960s and 1970s songs for a Be-In at the juke box in the Groove Pad. Keep on truckin’. Hope you enjoyed “Barbara Ann” by The Beach Boys.